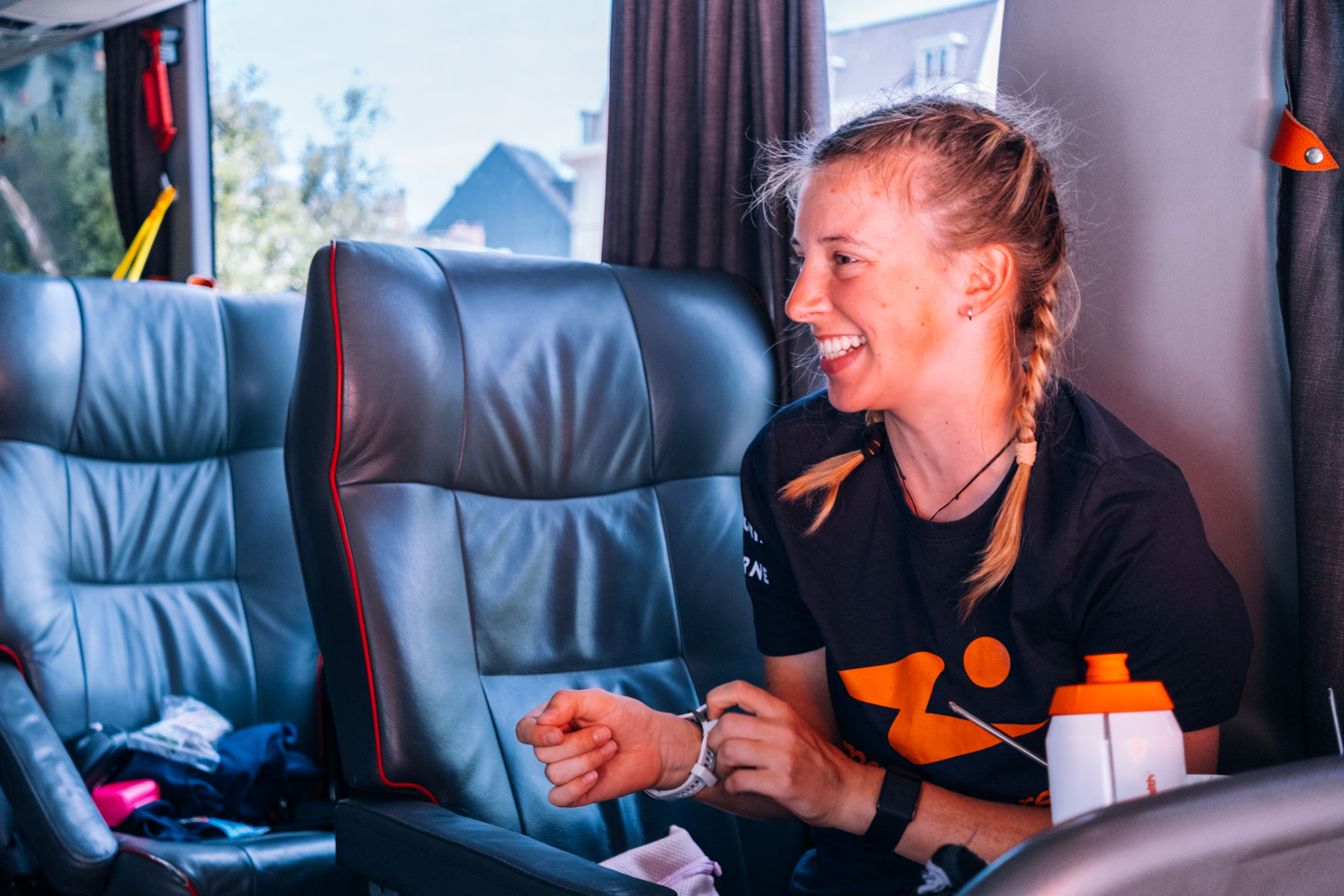 Human Powered Health starts its Women’s WorldTour campaign at the Santos Tour Down Under in Australia from January 15 to 17. Back on the calendar, in 2020, Chloe Hosking won the opening stage in racing for Rally Cycling.

Dutch rider Nina Buijsman and Cypriot champion Antri Christoforou will lead the GC charge with new sprinter Daria Pikulik earmarking a flat stage 1 as a potential for success. They will be backed up on the road by Americans Kaia Schmid and Lily Williams, as well as Henrietta Christie.

Buijsman is excited about her first opportunity to compete outside of Europe and race on different roads. “It will be a bit weird to have a race so soon in the season, but I’m really motivated,” she said. “We will get the best out of it and I’m sure we will get a great result.” 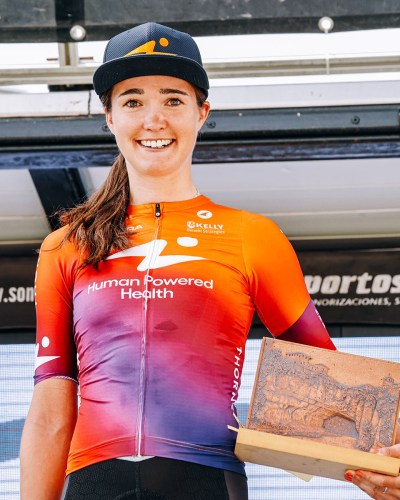 Buijsman was a consistent performer in 2022. 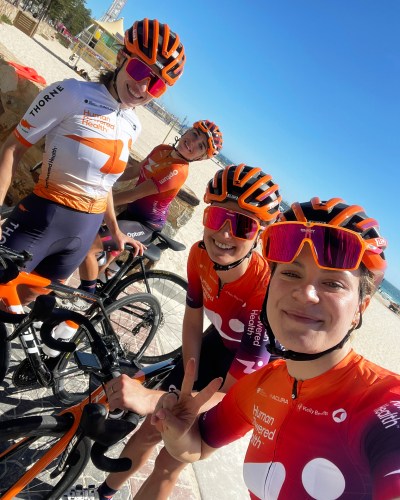 Catching up with teammates old and new in Adelaide.

The women’s team will have an energetic start to the season racing in the southern hemisphere. They will also be present at the Schwalbe Classic criterium, the Cadel Evans Great Ocean Road Race and the New Zealand National Road Championships through Kiwi Christie.

Christie spoke from her home of Christchurch on the country’s South Island, talking through her preparations for 2023 and why this precious time at home is essential for the New Zealander’s mindset and training.

A month Down Under

“The Tour Down Under is something I’ve dreamed about doing for years,” Christie beams. “I was so excited when I got the call that we’re racing it this year and I immediately got on to my coach because I really want to perform well.”

Christie has been supplied with plenty of data around the parcours from the directors ahead of the race and is expecting attacking racing on comparatively short courses.

“It’s going to be full gas from the gun,” she says. “Normally, on longer races, there’s an understanding in the peloton that we’ll ride the first climb at tempo, whereas I think you’ll see people attacking right away because there’s a high chance you could stay away,” she adds.

Her objectives for the block are to lay the groundwork for her national championships in the Waikato region on February 10 and 12.

“I’m hoping the Australian races will be a good boost in terms of getting me ready for the season,” the 2021 under-23 TT champion says. “It’s going to be a hard competition in New Zealand, but the possibility to win a jersey is something that really motivates me.”

Christie’s last race was the road world championships, taking on a 164.3km route in wet conditions. After taking three weeks off for recovery, the 20-year-old has been focussing on being physically ready for the restart in Australia.

“I focussed on longer rides for four weeks and then started strength training,” she explains of her routine. “I did low cadence efforts for resistance and then I started moving into threshold and VO2 to come into racing.”

There is a method behind keeping to this schedule and it’s to avoid burnout.

“With the season starting so early, you don’t want to overdo it in the first few months, you want to go well but not so deep that you hurt yourself down the line,” Christie says.

Luckily she has the perfect training base for it. Christchurch is notoriously windy which means Christie can battle into the wind over all sorts of terrain, from the straight country roads for efforts to the stunning climbs of Banks Peninsula.

Off the bike, she’s also kept up a weekly gym routine.

“It helps my movement and fine-tuning the rest of my body,” she explains. “It’s also good to do weight-bearing exercises like lifting because you don’t use those joints and so you can get brittle bones and that’s a big problem in the women’s field as well as the men’s peloton.”

Ever the sporty 20-year-old, Christie has supplemented all of this training with hiking, riding out to camp in Okains Bay, yoga and a weekly massage.

Hailing from over 10,000 miles away from where the majority of the cycling season takes place can be difficult for a young rider. Extended time away from family and friends, new languages, settling into new living environments, and all this while racing, is an experience that is shared by athletes from further afield competing in Europe.

“I really prioritize this time. For us, you don’t have the same safety blanket after a bad race unless you’re in a relationship, so I’ve been really fortunate to have made friends on the team,” she says. “I go camping with my home friends when I’m here which is normally quite difficult because they’re at university, but it’s something we prioritize because I’m only around for a few months.”

Christie has also been prioritizing her time with the two four-legged members of her family, Bull terriers Rex and Cid. As both are youngsters, she’s making sure she bonds with them so that they remember her when she returns.

A dedicated baker, Christie has been creating plenty of treats throughout her summer, including blueberry crumble muffins she made from a recent blueberry-picking trip. She also has a daily supplement schedule thanks to the team’s Personalized Health Solutions Partner, Thorne.

“I’ve been using the RecoveryPro in shakes or smoothie balls because it’s chocolate and I also use it in the evening after efforts or long days because it has compounds to help with sleep, as well as protein for a boost overnight,” she says.

Even though it’s summer in New Zealand, Christie still makes sure to keep taking Vitamin D-5,000.

“I wear 50 plus sunblock so I don’t get to absorb a lot of natural vitamin D,” she explains. “The supplement helps me to tick over to keep my immune system boosted. I also take the Multi-Vitamin Elite – both AM and PM – to help make sure everything is in order in terms of wellbeing.”

“I tend to have low iron so it helps me to stay at a consistent level. The magnesium powder helps alleviate sore and twitchy muscles I get before bed, helping me have a restful night of sleep.” 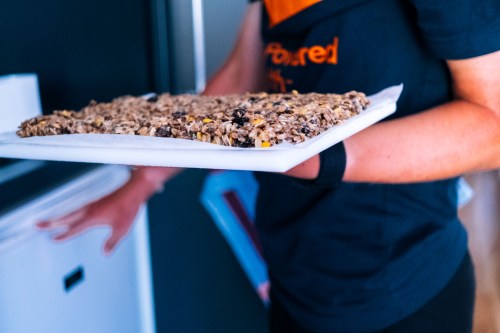 Some of Henrietta’s self-baked ride treats. 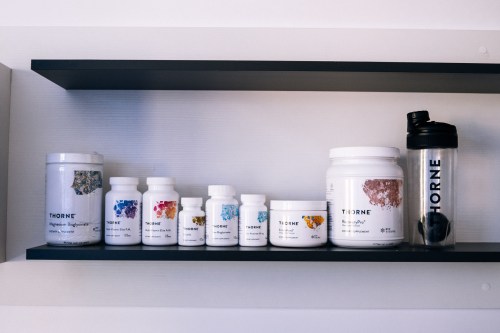 Santos Tour Down Under stage by stage

1/15 Stage 1 | Glenelg – Aldinga (110.4km) Flat
The Tour Down Under returns with a flat stage to Aldinga that will most likely see the first bunch sprint of 2023. Pole Pikulik can expect to go elbow to elbow with the likes of Coponni, Manly, Simone Boilard (St Michel – Mavic – Auber93), Ilaria Sanguineti (Trek – Segafredo) and Ally Wollaston (New Zealand), in the dash to the first Women’s WorldTour finish line of the year.

1/16 Stage 2 | Birdwood – Uraidla (90km) Hilly
A profile that goes uphill until the main trigger point at Mount Lofty, stage 2 will see general classification contenders come to the fore. With no uphill finish this year and this being the first of two stages under 100km, you can expect the puncheurs to really go for it.

1/17 Stage 3 | Adelaide – Campbeltown (93.2km) Hilly
The race will be won and lost on the 2.4km long at 9.1% Corkscrew Road climb. As the name suggests, there are plenty of twisting turns going both up and down the hill with it acting as the launchpad for ochre jersey victory in Adelaide.

Named after Australia’s only winner of the men’s Tour de France, the Great Ocean Road Race is a 141km one day Women’s WorldTour classic starting and finishing in Geelong. Rolling terrain and a double ascent of the 1km at 8.9% Montpellier Hill in the finale will surely reward attacking racing. 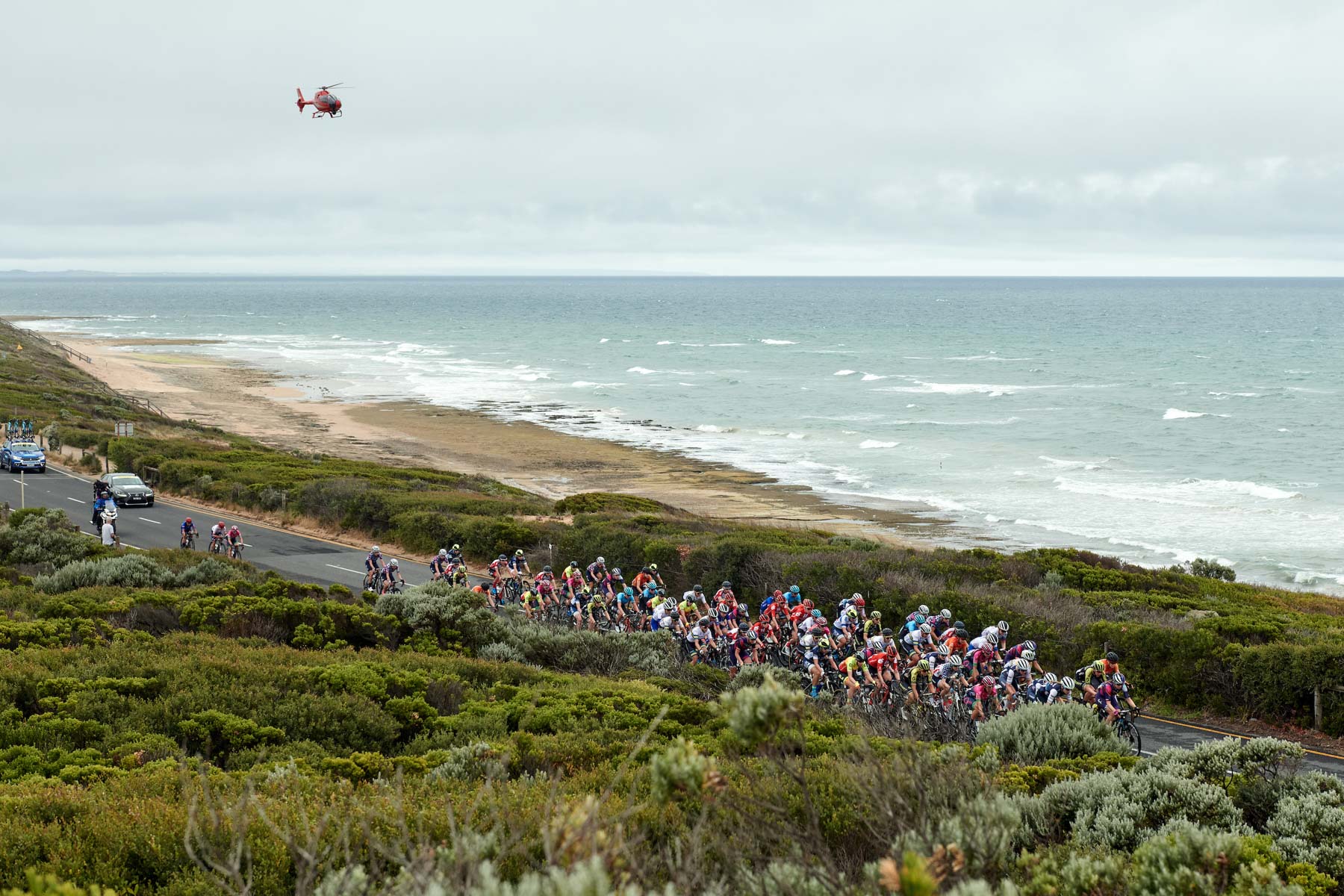 North American fans can catch the racing action on FloBikes with GCN+/Eursopsort supplying pictures to Europe. You can find up-to-date broadcast schedules via the Human Powered Health social media channels. 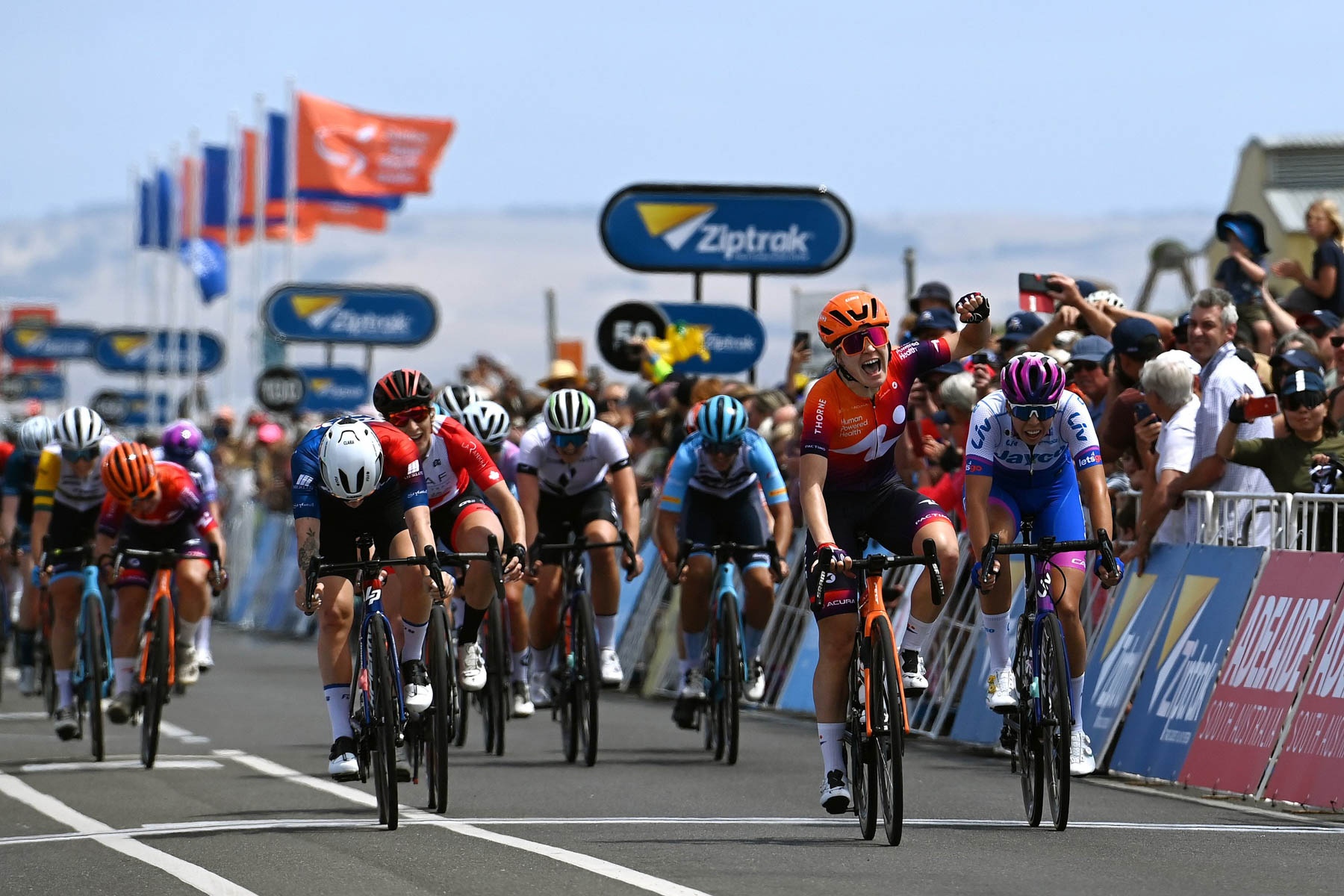 Daria Pikulik wins stage one of the Santos Tour Down Under 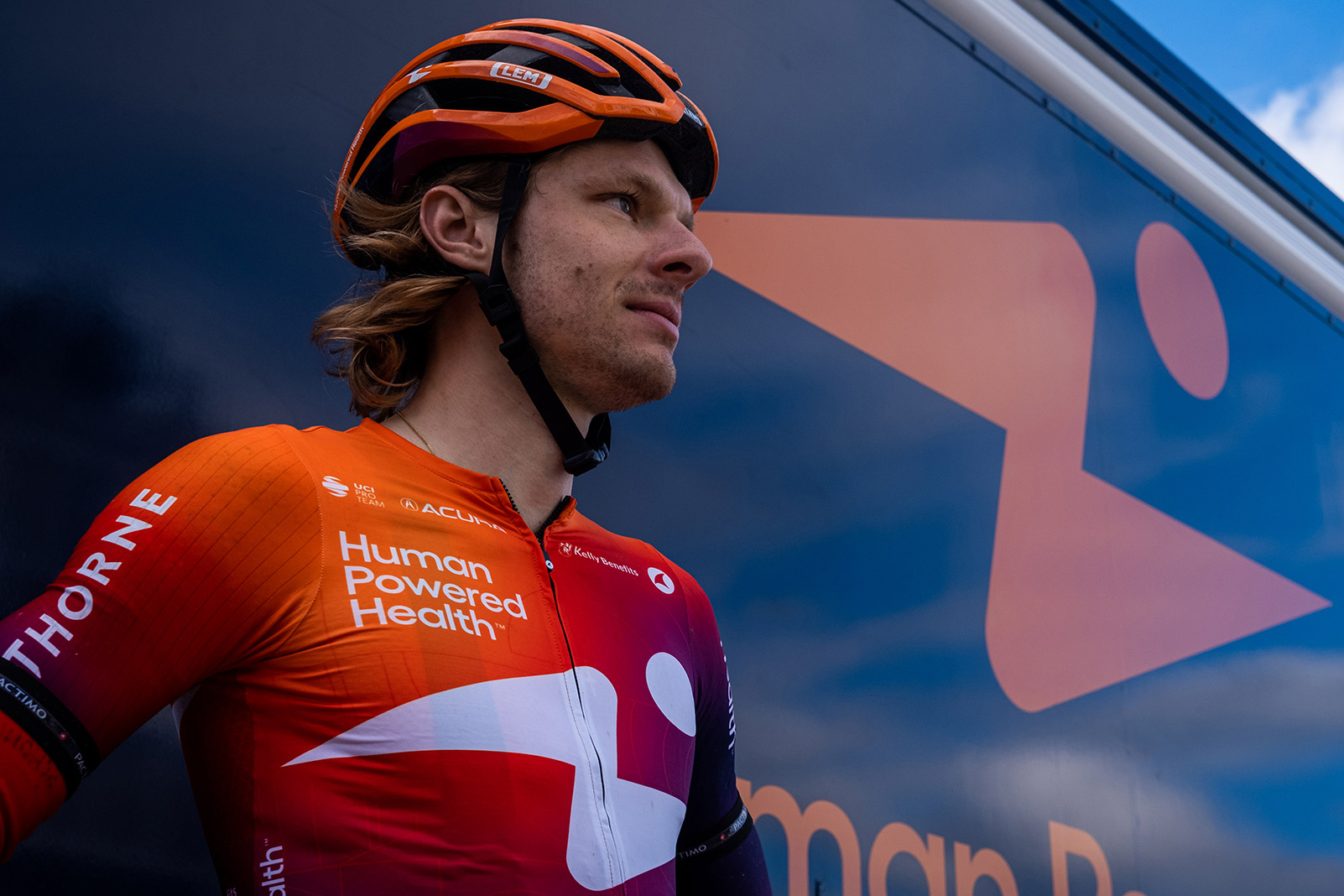